[New to this blog? Then you might not know what Accelerated Christian Education is. Here’s a whistle-stop tour.]

There are claims in the PACEs which even Creationists have known and acknowledged are untrue for decades. Despite this, they continue to be taught as science in ACE schools. But the thing that’s shocking is that the books in question have been revised multiple times since their first publication. Despite the fact that these claims have been publicly disproved for years, ACE has continued to teach them as science through successive reprints of their materials. This shows a flagrant disregard for accuracy. That’s not what I want from an educational publisher.

It seems inconceivable that, in the twenty-five years since these claims were first printed, ACE have not been made well aware of their inaccuracy (indeed, later I will present evidence that they have been, and have ignored it).

Today I’m going to look at three examples which occur in the compulsory ACE curriculum. By compulsory, I mean that every child in the ACE system has to complete this work in order to graduate with even the lowest-level ACE “qualification”. This is taught as verified science to every ACE child.

Fantastically, at the start of this year, the Institute of Education, London, acquired a stock of 20 ACE PACEs, brand new and direct from Christian Education Europe. That means that there is now a library in the UK where researchers can view these materials, without having to take my word for it. This is a triumph.

OK, so here’s what we can confirm is taught by ACE, current as of January 2013:

And God said, “Let there be a firmament in the midst of the waters, and let it separate the waters from the waters.”

A popular belief – not Biblical, just an example of Creationists making something up – is that, before the Flood, a water vapour canopy surrounded the earth, creating a greenhouse effect. It never rained.

Now, there’s a problem with this belief. Creationists claim that, in Noah’s Flood, the canopy condensed and fell as rain. Unfortunately, for the canopy to provide that quantity of water, pre-flood atmospheric pressure and temperature would have been obscenely high. Adam and Eve would have been boiled alive.

Creationists know this. In a paper presented at the First International Creationist Conference (which must have been a fun event), Larry Vardiman presented a paper called “The Sky is Falling” where he acknowledged as much. You know when that happened? 1986. Remember that date.

So, this claim appears in Science 1086. This PACE was first produced in 1986, so ACE might not have read Vardiman’s paper then. But the PACE was revised in 1998 (which remains the current edition), and the claim was not removed. It’s on pages 11 and 16, with this diagram: 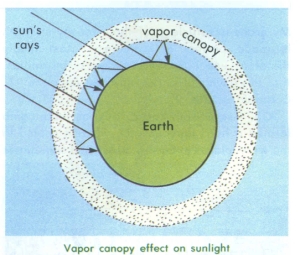 It appears again in Biology 1108 (first copyright 1989; still present in my 1995 revision and current versions), with this diagram:

I’ve already covered this in “top 5 lies taught by ACE“. In 1977, the Japanese trawler Zuiyo Maru brought up this beauty:

In 1978, evidence was published which strongly indicated the creature was, in fact, a decaying basking shark.

So ACE included this evidence in 1977 only, right, and discontinued it in 1978 when the evidence disconfirmed their argument?

Here’s the picture that appears in that PACE. As you can see, it’s an artist’s impression of the above photo.

Again, I’ve dealt with this before, but I want to draw attention to how ACE has continued to teach this as confirmed, retaining the material in successive revisions of their curriculum.

In 1986, the Institute for Creation research admitted that the Paluxy tracks could not be used in good faith as evidence for the co-existence of humans and dinosaurs.

Here’s what ACE claims is a picture of human and dinosaur tracks side by side at Paluxy river, Texas (click to enlarge):

Here it is again in Science 1096. This PACE, devoted entirely to Creationism and full of misinformation, was released in 1986, revised in 1994, and the current version, shown here (and identical to previous “revisions” apart from the front cover), is the 2002 revision: 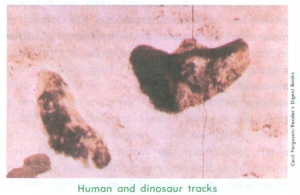 I could continue, but I feel I’ve made my point.

Last year, I wrote a letter to Christian Education Europe (the UK distributor for ACE materials), and I pointed out these things and more.

In his reply, CEE head honcho Arthur Roderick dismissed my argument: “I do recall that these have been raised before, and forwarded to ACE, so this is old stuff.”

Arthur has refused permission for me to reproduce his letter here, but I believe I can show you just that bit while staying within fair use guidelines (click to enlarge):

Arthur Roderick admitted that he and ACE USA have already been made aware of these problems, and with his dismissive response, demonstrated that he doesn’t care.

These PACEs are all third edition PACEs. According to ACE’s own timeline, the first grade 3rd edition PACEs went on sale in 1978. The rest of the third edition were gradually phased in; by 1994, they’d completed all twelve levels of English. That’s right, it took 16 years to finish the English curriculum. This has stayed in use ever since. As I’ve shown here, there have been minor revisions, but it’s been largely unchanged.

The fourth edition PACEs are now being produced. So far they’ve completed grades 1-6 in science and social studies (and you can view previews of them online, which is worth a giggle). So eventually (although possibly not for another decade or more) the science PACEs I’m critiquing will be replaced by fourth edition.

Can we expect these to be substantially different?

I don’t have any third edition PACEs of science or social studies grades 1-6 to compare with the current editions, but I have seen third edition PACEs, and these fourth edition ones look the same, but with slightly updated graphics. The layout and content is the same in general style, even if the text has been rewritten (which I can neither confirm nor deny).

However, I do have one interesting insight.

In 1993, Speck and Prideaux critiqued ACE in the Australian Journal of Education. One of their particular criticisms was that the multiple choice questions often had meaningless answers as alternatives.

They singled out one particular example: “Jesus died on the (cross, toss, chrome).”

I’m interested by this example, because it dates from 1993 – third edition era.

Whereas ACE, on their website, have samples from the newly-introduced fourth edition. And here’s a screenshot I took just this morning from this page [the preview is interactive; click and drag on the bottom right hand corner to turn the pages]. Notice the second question:

So it seems that, in the radical advance from third edition to fourth edition, ACE has changed “chrome” to “moss” as a multiple choice option.

If this is the kind of revolutionary change we can expect from third edition to fourth edition, I can’t wait for them to complete the senior level biology curriculum.

[Note: There may have been, for all we know, other revisions of these PACEs too. Unlike most publications, ACE do not print a list of all revisions on their books. The PACEs only give the date of first copyright and the most recent revision. I can sometimes give an extra date where I have an older copy myself.]