← Darwin made Hitler do it: The secular version of ACE
Attacking science, insulting Islam: the reality of PAC charter schools →

Creationist charter schools: not just for Texas, not up to scratch

On Friday, Salon ran an article I’d written about tax-funded charter schools in Texas which promote creationism. It’s now comfortably the most widely-read thing I’ve ever written, so I’m guessing you’ve seen it. I first heard of these charter schools a month ago when a parent, Joshua Bass, contacted me to say his son appeared to be doing Accelerated Christian Education in a charter school. It turned out this was ResponsiveEd, a curriculum designed by ACE’s founder that puts a vaguely secular gloss on the ACE model and sells it back to the state.

A couple of important points got missed from the final Salon piece:

The other point I was not able to make in that article was just how similar ResponsiveEd is to Accelerated Christian Education.  A search on LinkedIn shows that a number of ResponsiveEd’s employees are former ACE staff, and the classroom setup is almost identical. Here are pictures of two schools. First ACE: 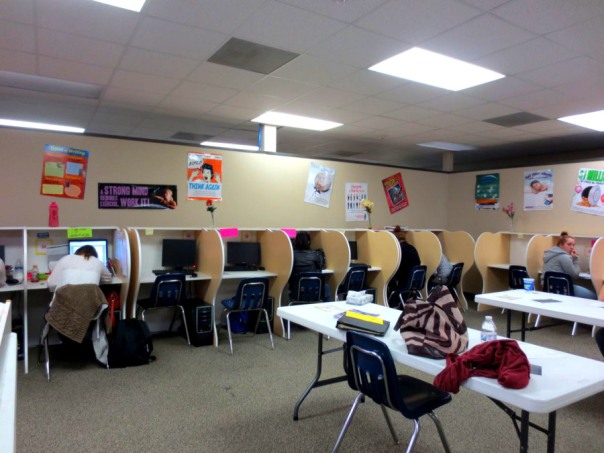 Here’s another ResponsiveEd classroom for comparison.

The similarities don’t end there. ACE and ResponsiveEd give students almost identical goal cards and progress charts, indicating that the curriculum runs on the same lines. Ex-ACE students will understand best how all this works, but anyone can get the general point from this: 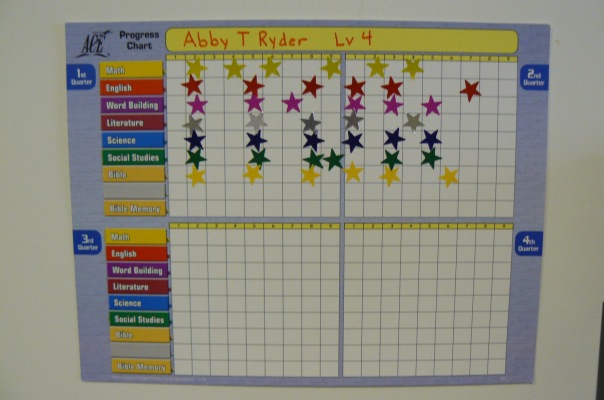 You need to read the full report to get a balanced view of CREDO’s findings, which also indicated that English Language Learners (ELL students) and special education students performed better at ResponsiveEd:

The subpopulation analyses show that Responsive Ed has had some success at helping ELL and especially SPED students, but Responsive Ed students in other subpopulations generally had significantly weaker growth than their TPS counterparts. The reader should keep in mind that this is only a single set of analyses with one window of data which does not cover the entirety of Responsive Education Solutions operations. That being said, the results of this study should be considered along with results of other evaluations of Responsive Education Solutions performance to determine if this performance is an exception or part of a larger pattern of weak performance.

Still, ResponsiveEd were unhappy with CREDO’s assessment, and they let them know in a public statement. They really should have kept their mouth shut, because CREDO’s comprehensive reply [Word document download] made them look even worse. ResponsiveEd cited other studies which indicated good outcomes for their students, and CREDO’s critique of these made ResponsiveEd’s claims to educational respectability look altogether more suspect:

Responsive Ed also cites their schools’ Texas school accountability ratings, another measure strongly based on achievement, as evidence of their high performance. Responsive Ed correctly states that “100% of Responsive Ed’s dropout recovery and prevention schools earned the highest possible academic rating given by the Texas Education Agency.” This is true, but as alternative education campuses there are only three ratings available to them: AEA Academically Acceptable, AEA Academically Unacceptable, or AEA Not Rated. Responsive Ed’s dropout recovery and prevention schools received ARA Academically Acceptable ratings.

ResponsiveEd also claimed they found CREDO’s data confusing, which seems more a reflection on ResponsiveEd’s reading comprehension  than anything else. Perhaps this is why their students show significant negative impact for reading. ResponsiveEd’s complaint also misrepresented what precisely CREDO had claimed.

As Credo themselves note, their study is not alone an adequate measure to say definitively whether ResponsiveEd offers an adequate education. But as I argued at Salon.com, given that ACE’s pedagogy has been the subject of sustained criticism for more than 30 years, and that ResponsiveEd’s is essentially the same, it doesn’t look good, does it?

Speaking of reading comprehension, a few over-enthusiastic individuals have conflated ACE with ResponsiveEd entirely, and claimed that ResponsiveEd is teaching that the Loch Ness monster is evidence against evolution. I have no evidence whatsoever that this is the case (I highly doubt that it is), and I have never claimed this.

The fundamentalists who wrote my schoolbooks believed ‘separation of church and state’ meant that government couldn’t interfere with churches, but that churches could (and should) interfere with government. So it’s not surprising that those same people have set up schools which violate the spirit of the First Amendment. We’ll have to wait for a legal challenge to see if they also violate the letter of this law.

Thanks to Zack Kopplin for bringing the CREDO report to my attention.

← Darwin made Hitler do it: The secular version of ACE
Attacking science, insulting Islam: the reality of PAC charter schools →