I was telling a guitar-playing friend about Rex Carroll a couple of years ago, so I showed him this video, and it struck me how wildly inappropriate this style of music is for that message. That big chant-along chorus makes them sound gleeful at the prospect of sending souls to hell, which I really hope isn’t what they intended. Choruses like this are for making you grin and punch the air. They are for (whoa oh) living on prayers, getting rocked, and announcing your disinclination to take it.

They are not for taunting the damned.

But that’s what Whitecross did, and even if you agree with their theology, this is surely at least a little bit distasteful.

When I was a newly-minted ex-Christian, I was keen to defend the practice of evangelism to my fellow heathens. “They think they’re doing you a favour,” I explained. “If someone really believes you’re going to hell unless you make a change, of course they’ll try to rescue you. You should be flattered their care enough to tell you you’re going to hell.”

I stand by that assessment. If anything, I think that if Christians really believe in hell, they’re not doing nearly enough evangelising. That said, several years of being told I’m going to hell have lessened my patience with evangelists somewhat. The most irritating thing is the way everyone says it as though it will be news to me. I FUCKING KNOW. I spent my entire childhood preaching it. Of course, to many of the faithful, the Good News is so good, and so obviously right, that they only possible explanation for someone not being a Christian is ignorance. The result is, well, quite patronising.

The weird thing about bands like Whitecross is that although the lyrics are evangelical, they rarely played for non-Christians. They were signed to a Christian record label, StarSong, who distributed their albums to Christian bookshops. They played gigs for church youth groups and at Christian festivals like Cornerstone. So while from their lyrics you’d get the impression that this is a group intent on reaching the unconverted, from their actions you’d have to conclude that they are largely incompetent. 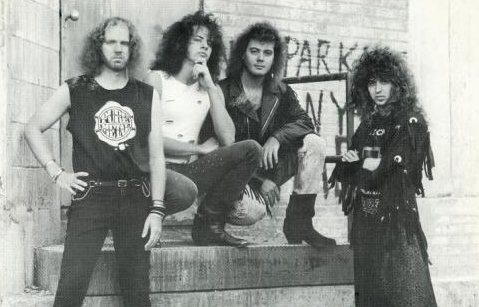 Whitecross: To be fair, everyone looked this bad in the 80s.

Actually, I think we’ve just misunderstood their mission. Whitecross are like commercials for Ford that aren’t designed to win new customers, but just to make existing Ford customers feel satisfied with their purchase. Christian youth group kids would go to see an awesome rock band like Whitecross doing Great Things For God, and they’d be inspired to grow up to be Strong In The Lord too. At Christian rock concerts, there are always altar calls for people to go forward and Get Saved, but the kids responding to these calls are mostly Christian teens who just feel guilty for not praying often enough. Still, the others see the ‘great response’ to these altar calls and feel convinced that they’re on the right path. It’s preaching to the converted by pretending to preach to the unconverted.

Taken from that point of view, “No Second Chances” looks rather different. Imagine the scene at a Whitecross gig as several hundred On Fire For God teens shout out “GIVE ME ONE MORE CHANCE! … NO SECOND CHANCES!” These kids are the elect. They’re not going to be the ones in the fire; they’re the ones who will be saved. Yes, the song tells them that they need to tell their friends about Jesus so said friends don’t face an eternity being gently crisped, but it also reinforces the us and them divide. If you’re singing along, you’re part of the Elect. Everyone else, well, when judgement comes, it will be their fault. As the song says, “You listened to lies”.

You listened to lies.

That’s it. Eternal damnation, because someone else deceived you. Sucks to be you, pal. No second chances. *Guitar solo*