← How Accelerated Christian Education Is Racist
What is the Word of Faith? →

There are “facts” in the ACE PACEs that are absolutely untrue. Now, you might be kind and say, “Perhaps they are mistakes.” But these errors have remained in the PACEs through successive reprints, and they are things which were known to be untrue long before the PACEs went into print in the first place. Therefore, we can say that the writers didn’t care about factual accuracy. If you’re running an education system, that’s gross negligence and I feel no compunction about calling these things lies.

I called ACE on May 3rd, 2012, and was told that all of these PACEs are still in print and the content has not changed. These lies are still being taught in over fifty British schools today.

This would be at number 1, but since it’s already been substantially covered in the Times Educational Supplement and the Guardian (at my instigation, please note), I don’t want you to feel you’re getting second-hand information. If you haven’t read the stories and can’t be bothered, Science PACE 1099 contains this priceless wisdom:

Some scientists speculate that Noah took small or baby dinosaurs on the Ark…. are dinosaurs still alive today? With some recent photographs and testimonies of those who claimed to have seen one, scientists are becoming more convinced of their existence…

Have you heard of the ‘Loch Ness Monster’ in Scotland? ‘Nessie,’ for short, has been recorded on sonar from a small submarine, described by eyewitnesses, and photographed by others. Nessie appears to be a plesiosaur.

4. Solar Fusion is a Myth

The sun, as everybody knows, works by nuclear fusion. Unfortunately, Creationists have a pet theory, outlined on pages 7-9 of Science 1096 (a PACE devoted entirely to refuting evolution, packed with misinformation and distortions of the truth). In short, Creationists want to prove that the sun is shrinking. If the sun is shrinking at a constant rate, then billions of years ago it would have swallowed up the earth. This, they say, proves that the universe must be young.

Unfortunately for them, the sun is not shrinking. That’s because, contrary to their assumptions, the sun is not a massive gas boiler gradually shrinking as it burns fuel. It’s a fusion reactor. This doesn’t fit their model, so they outright deny the truth:

The nuclear fusion theory of how the sun emits heat and light is an invention of evolution scientists… All other theories require the sun to use up all its energy sooner than the evolutionists’ invented timetable would allow.

From the same page as the Loch Ness Monster claim (man, they were just letting the crazy fly that day) comes this:

A Japanese fishing vessel brought up the decomposing body of a dinosaurlike [sic] sea creature off the coast of New Zealand. Caught at a depth of 900 feet, the creature weight 4,000 pounds, measured 32 feet in length, and was seen and photgraphed by the crew members. The animal could not be matched with any living species but certainly resembles a supposedly extinct species of dinosaur.

That quote was placed alongside this photo. Actually, not this photo; an artist’s impression of this photo. 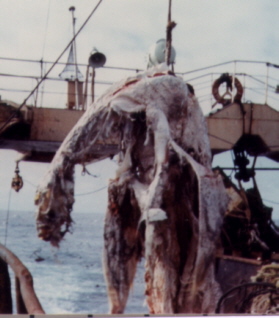 Looks very dinosaur-y, no? Well, yes, but it wasn’t a dinosaur. It was a decaying basking shark; that’s just what they look like when they rot a bit. There was a lot of fuss about this when it happened, in 1977, before scientists got on the case and established what was going on through tissue samples. You can read all about it here.

Here’s the thing: As I said, this happened in 1977. Scientific evidence that it was a shark had been presented in 1978. So when did ACE write a PACE strongly implying this was a dinosaur (and saying it couldn’t be matched with any living species)? Nineteen Eighty-Nine. 1989. And they kept it in subsequent revisions. Utter mendacity.

And anyway, even if dinosaurs were found alive today, that wouldn’t disprove evolution. As a University of Sussex lecturer wrote to the TES, it would just mean we have to rewrite some timelines.

2. Evolution Has Been Disproved

Not “there are flaws/ gaps in the theory of evolution,” or “evolution is just one theory” – those normal Creationist arguments are bad enough. No, ACE PACEs say on multiple occasions that evolution is impossible.

And, best of all:

That’s, um, not quite true though, is it?

There is a claim that fossilised human footprints have been found alongside dinosaur tracks in the bed of the Paluxy River, Texas. Well, I’ll just let ACE pick up the story.

“Biblical and scientific evidence seems to indicate that men and dinosaurs lived at the same time…. Fossilized tracks in the bed of the Paluxy River near Glen Rose, Texas, also give evidence that men and dinosaurs existed simultaneously. Fossilized human footprints and three-toed dinosaur tracks occur in the same rock stratum…. That dinosaurs existed with humans is an important discovery disproving the evolutionists’ theory that dinosaurs lived 70 million years before man. God created dinosaurs on the sixth day. He created man later the same day.”

Unfortunately, the human tracks aren’t real. They may have been a hoax. Even the notable loons at Answers in Genesis have admitted they can’t be used as evidence for Creationism. Talk Origins deals with it too.

But that’s OK. ACE wouldn’t lie, would they? It was probably discovered that they were a hoax after the PACEs went into print, right?

Nope. By 1986, even the Institute for Creation Research had given up on the Paluxy prints. And as I’ve already told you, this PACE went into print in 1989. And it’s also mentioned in Science 1096, first copyright 1986.

The Paluxy Tracks are the Creationist equivalent of the Piltdown Man, except that evolution has other solid evidence and Creationism… doesn’t.

So there it is. Accelerated Christian Education: written by people who don’t care about the truth.

EDIT 10th May 2012: Changed “these tracks were a hoax” to “They may have been a hoax.” Certainly, the tracks are not human, and it was known that they were not real long before ACE wrote about them. But there doesn’t seem to be a lot of evidence for a hoax. Perhaps some were hoaxes, but they are also just random foot-like impressions in the rocks, and tracks from other dinosaurs.

Comments are now closed for this post. Trackbacks and pingbacks are still on, and most other posts still have comments open. If you have something important to add, you can message me.