The battle for evolution in Scottish schools

Tomorrow, the Scottish Parliament’s Petitions Committee will be hearing from members of the British Centre for Science Education (BCSE) and Scottish Secular Society (SSS). Earlier this year, the SSS started a petition urging the Scottish government issue guidance on the teaching of creationism in schools. In England and Wales, there is clear guidance that creationism and Intelligent Design are not valid scientific alternatives to the theory of evolution, and should not be taught as such. In Scotland, there is no equivalent document.

This is a problem, because as we’ve previously seen, there have been significant inroads by creationists in some Scottish schools. Fortunately in that case, there was a decisive win for science. But what that case showed was that creationism genuinely is an issue in Scotland, and it will continue to be so without clear guidance. So you might think that the SSS petition, backed by three Nobel prize winners, would be uncontroversial.

In case you’d forgotten, this picture of a dinosaur working as a beast of burden was included in creationist material distributed in a Scottish school in 2013.

END_OF_DOCUMENT_TOKEN_TO_BE_REPLACED

The headline of Friday’s Daily Telegraph screamed “Toddlers at risk from extremists“. The British Education Secretary has announced plans to ban teaching creationism is publicly-funded nurseries.

What it didn’t say is that, although the British Humanist Association (BHA) was the most prominent campaigner against creationism in nurseries, this was originally the subject of a letter-writing campaign by the readers of Leaving Fundamentalism. But I know you wrote the letters, so thank you.

Here’s a brief history of what has happened, and what it means. More importantly, an article in the TES last week may explain why ACE schools have been able to get away with so much.

END_OF_DOCUMENT_TOKEN_TO_BE_REPLACED

Take a lesson from the kids

This is a guest post by Tyler Francke, owner of GodofEvolution.com.

It’s not typical (though probably far more common in Accelerated Christian Education schools) that your principal is also your church pastor, but such was the case at the small private school in Oregon that my wife attended from preschool through twelfth grade.

Based on her experience, I wouldn’t recommend it. Giving a single man (always a man at ACE schools, of course) such broad and absolute authority over impressionable children’s intellectual, spiritual and moral development just seems like an obviously bad idea.

She could tell you horror stories. One of the pastor/principal’s favorite exercises on Wednesday morning chapel services was to call the students up on stage and “separate the sheep from the goats.”

In the original parable that inspired this grim practice, Jesus spoke about how he would judge the nations at his second coming, separating those who lived righteously and gave to the needy from those who were wicked and ignored the poor and suffering.

In Pastor/Principal’s version, he would separate those whom he deemed to be the “good kids” from the bad ones, and my wife always ended up with the goats (those are the ones destined for the eternal fires, by the way, if you’re unfamiliar with the story).

END_OF_DOCUMENT_TOKEN_TO_BE_REPLACED

Please find attached my letter of response to your article in the New Statesman. I have sent it to the paper and also trust you will publish it in whole and unedited on your blog.

I am only too happy to oblige. Since my own article was quite widely read, I think it’s only fair that CEE gets a fair hearing, so please share this widely. Here it is (click on each page to enlarge):

Alright, now you’ve read it, here are my comments (and if CEE disagrees with anything I write here, they’re welcome to respond again. We can keep going until one of us gets bored).

To: The Editor- New Statesman

Off to a flying start.

END_OF_DOCUMENT_TOKEN_TO_BE_REPLACED

Even the minister can’t stand ACE

Fundamentalist Christian education systems are sometimes shielded from criticism because of the word “Christian” in the name. People tend to assume that anything Christian must have a moral core. Those who don’t know better might think that criticism of ACE is merely an anti-Christian attack. That’s why it’s so important that Christians speak out against abuses in the name of Christianity. Anyone can call themselves ‘Christian’, but that doesn’t mean they’re doing anything Christlike. Enter Annari du Plessis.

Hot on the heels of the vicar who couldn’t stand ACE, here’s another minister who isn’t a fan.  I’ll let Annari speak for herself. 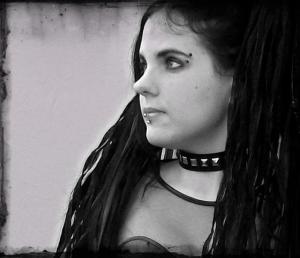 I was in an ACE school from Grade 8 (2001) to matric (2005) and started studying Theology and Ancient Languages in 2007. I am a legitimated minister of the Dutch Reformed Church in South Africa, and I’m currently doing my MTh degree on evolutionary theology.  END_OF_DOCUMENT_TOKEN_TO_BE_REPLACED

Evolution is a conspiracy!

I’ve chalked up another flawless victory and been published in the New Statesman.

As I write, the article is the top story on the Statesman‘s home page. 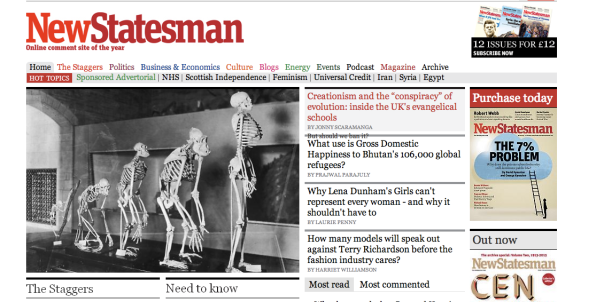 Please share this one. My previous widely-published articles on ACE have been somewhat tabloid in style, all numbered lists and sections in bold. This is an attempt to raise the level of the conversation on the subject. Here’s the link:  http://www.newstatesman.com/2014/01/creationism-and-conspiracy-evolution-inside-uks-evangelical-schools

In a bid to do less blogging and more actual work, I’ve got really behind in sharing links with you, so here’s some more excellent reading if you have time:

Zack Kopplin did a thorough exposé at Slate about ResponsiveEd, the secularised version of ACE that’s currently gaining ground in America. I’ve previously written on that too.

Tyler Stoltzfus, past (and hopefully future) Leaving Fundamentalism guest blogger, wrote more about his life as an atheist at an ACE school for AlterNet.

I did a thing for AlterNet about the propaganda cartoon that lace the ACE curriculum, and how they seem to promote racism, sexism, and the intolerance of non-Christians.

Dana Hunter has started blogging about ACE too. She has purchased the entire 8th grade Earth Science PACE set and is going to review each one in turn. You may have noticed my strategy for 2014 is to get people who aren’t me talking about ACE (anyone who cares knows what I think by now), so this is a very pleasing development.

I recently woke up in the middle of the night, gripped by a sudden panic. What if I’m wrong?

I’ve spent the last several years campaigning to raise public awareness of fundamentalist Christian schools that I consider abusive. I went to such a school myself, so I have a dog in this fight. If what they taught me is true, then I have spent these years fighting against God himself.

The fear claws at me for a while, and then in my groggy state I manage to remember some stuff:

If the strict Muslims are right, I’m equally doomed whether I’m a Christian or an atheist, yet that has never given me a moment’s worry in my life. My fear is not spiritual, or rational. It’s cultural.

And anyway, the notion of a just and/or loving God sending me to infinite punishment for finite sins is self-contradictory. It can’t be true.

Panic over, I go back to sleep.

I haven’t believed in God for seven years. I’ve openly identified as an atheist for four of those, but there are still situations where I have flashbacks to my fundamentalist past. END_OF_DOCUMENT_TOKEN_TO_BE_REPLACED

At one of my recent talks on Bristol, an attendee challenged me on my definition of fundamentalism. And while I still think his definition did a violence to any traditional usage of the term (while mine was, obviously, unassailably correct), he raised an important point. ‘Fundamentalist’, in modern usage, is essentially a swear word. If you call someone a fundamentalist, you’re writing off their views as irrelevant and invalid. At the same time, the word does have a historical meaning, referring to a specific type of Christian theology.

In the past, I have capitalised on that very ambiguity with this blog. I blog about self-identified fundamentalists, the kind meant by the historical meaning of the word. But since I also think that these views are irrational and their adherents are extremists, I’ve been letting my readers interpret the term however they wish. If by fundamentalist you mean someone who believes in the literal truth of an inerrant Bible, that’s what I mean. But if you mean a terrorist, well, as far as I’m concerned the atrocities committed by self-proclaimed fundamentalists at Christian reform homes are in the same moral ballpark as terrorism, so that’s fine too.

Now I’ve decided I want to engage meaningfully with believers, I have a problem. You can’t reach mutual understandings through interfaith dialogue while calling your conversation partners terrorists. So is it time to lose the term ‘fundamentalism’? Even Bob Jones University, the spiritual home of fundamentalism, has made noises about ditching it:

“Basically, we’ve decided that we can’t use that term,” said Carl Abrams, a BJU history professor and a longtime member of the faculty. “The term has been hijacked and it takes you 30 minutes to explain it. So you need something else.”

END_OF_DOCUMENT_TOKEN_TO_BE_REPLACED

By now you’ll have seen my Salon article about how charter schools (mostly in Texas) are promoting creationist ideas in a way that seems to violate church-state separation. There are two main curricula discussed: ResponsiveEd and Paradigm Accelerated Curriculum (PAC). Both are offshoots of Accelerated Christian Education (ACE). Of the two, ResponsiveEd seems to be used more widely, but it’s hard to get solid information about it. PAC, on the other hand, has kindly uploaded many curriculum samples to its website. What they’ve uploaded will be of great concern to campaigners for both secularism and science education. PAC lessons mock and insult Islam, promote Christianity, and attack mainstream science.

A brief web search finds Paradigm Accelerated Charter Schools in Dublin, Comanche, Wallis, and Early, all in Texas. Although the Dublin school is shown as having closed or relocated (and its website now links to a page in Japanese), it was functioning at least as recently as January 2013, when GreatSchools.com last updated its page, giving the school 2 out of 10. None of these schools has its own website, so it’s hard to determine their status, but PAC markets itself as a charter school curriculum and claims its curriculum “honors the so-called ‘separation of church and state’ doctrine, thus enabling purchase of Paradigm curriculum with tax funds.” Hmmm.

PAC is run by former ACE Vice President Ronald E. Johnson, who you will remember for writing “Children matriculate into Christian school in dire need of spiritual programing of their minds to accept and desire the things of Christ.” What ‘programing’ is he offering now?

The region where Europe, Asia, and Africa meet is known as the “Fertile Crescent.” Our timeline begins there about 4,000 BC when scientists agree that a cataclysmic event occurred (like a worldwide flood) that forced mankind to “start over.”

END_OF_DOCUMENT_TOKEN_TO_BE_REPLACED

Creationist charter schools: not just for Texas, not up to scratch

On Friday, Salon ran an article I’d written about tax-funded charter schools in Texas which promote creationism. It’s now comfortably the most widely-read thing I’ve ever written, so I’m guessing you’ve seen it. I first heard of these charter schools a month ago when a parent, Joshua Bass, contacted me to say his son appeared to be doing Accelerated Christian Education in a charter school. It turned out this was ResponsiveEd, a curriculum designed by ACE’s founder that puts a vaguely secular gloss on the ACE model and sells it back to the state.

A couple of important points got missed from the final Salon piece:

The other point I was not able to make in that article was just how similar ResponsiveEd is to Accelerated Christian Education. END_OF_DOCUMENT_TOKEN_TO_BE_REPLACED