Even the vicar can’t stand ACE

Happy new year everyone. I hope December treated you well and you’re ready for another year of fighting the hydra that is Christian fundamentalism. I told you that this year I wanted to co-operate more with sympathetic Christians, so here’s a statement of intent: a guest post from a priest. To the kind of fundamentalists who think that baptism by sprinkling is a damnable heresy, this won’t make much difference. But to parents who are on the fence about whether to choose Accelerated Christian Education (ACE), or to those who believe that this website is simply a crusade to destroy religious freedom, I hope this will make you think twice.

Hello. My name is Oliver. I’m 42 years old, married with two kids and I work as church minister in England. Hobbies include shooting, fishing and riding my ex-Army Harley Davidson.

There were things I liked and things I hated.

Things I hated would include:

First, the petty ad hoc rules. These were made up by the staff as they went along yet enforced like the Decalogue writ on tablets of stone. One time I was guilty of “walking in a lackadaisical fashion.” Another time my haircut caused offence. And so on. The thing is, one never knew; there was no rule book to appeal to, no rights. It was Kafkaesque and capricious. This was made worse by the fact that the headteacher – sorry, “Principal” – American English, please! – hit me on at least one occasion as part of the school’s use of corporal punishment.

Second, use (misuse? abuse?) of the Bible. Ironically, the Christian school taught the Bible as piecemeal proof-texts to be learned by rote and taken literally. So, for example, the science coursebooks assumed the Biblical “fact” of young earth, six day creationism. I now know Genesis contains two cosmogonies and that as they are written in verse then maybe they are not to be taken as fact. (Although I should add here that, as a Christian, I accept the creation accounts in Genesis as Scripture and I therefore take them as truth. As an example of the difference between fact and truth, see Jesus’ parables; they contain and covey truth but are clearly made up stories and therefore not fact at all but pure fiction.)

Third, the extremely conservative social, economic and political ideology of the curriculum. This right wing bias was even manifest in the comic strip cartoons – which, incredibly, were racially segregated. Yes, in a word: Apartheid. To which I say: God bless Nelson Mandela – may he rest in peace and rise in glory. Oh, and when I spotted the racial segregation in the PACE cartoons (yes, I was smart kid) my questions and concerns were brushed aside. But let me say the “a” word one more time in case you missed it: Apartheid. And all in the name of God and Jesus. Amen. Hallelujah. This was the worst kind of Bible belt, redneck religion, and the school was run as a kind of a curious prison – albeit with some nice warders. 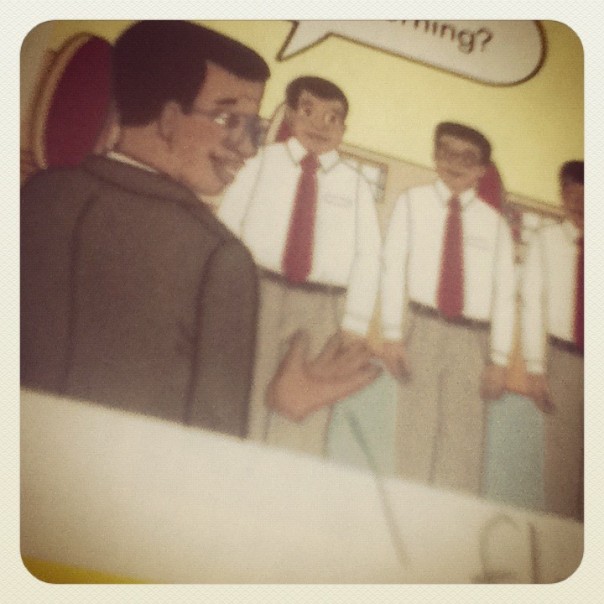 This ACE cartoon depicting a segregated school was posted to a public Facebook group with the comment “There’s something a bit off.”

Umm. One or two of the staff were OK (although I hesitate to call them “teachers”). Also the way it was so small and weird and we got away with stuff that I really don’t see my kids doing even in their big rough’n’tough secular secondary schools. Ha, in some ways we had a blast.

Did it prepare me for what came next – A levels, university, life? No, not even nearly. But there being no counterfactual, no alternative parallel history, I can’t see or say how I would have turned out differently. To be honest, I remember hating year 7 (the first year of high school) at the local state secondary before I was taken out and put in the ACE system so maybe I just don’t “do” schools / formal education / institutional establishments. I’ll never know. Or care for that matter. And it doesn’t matter now anyway.

Most importantly (by its own standards and mine) did ACE introduce me to God / Jesus / the Bible / the church – in a word, to Christianity? Answer most emphatic: “no”. I was in my twenties before anyone told me the first and most foundational truth of Christianity: namely, that God is love.

What one might call the secondary stuff of Christianity was also just as lacking: I can’t ever remember the sacraments (variously called “communion” / “mass” / “eucharist” / “the Lord’s Supper” by different denominations). Nor the social action side of Christianity (I don’t recall any mention of Mother Teresa but then maybe a Catholic woman didn’t fit the ACE definition of a Good Christian?). The impression I got was that the school wanted me to be more like Ned and less like Homer. But you know what? God loves Homers (oh, and homos). Jesus liked the tax collectors a whole lot more than the text collectors. Truly, I was taught by the scribes and Pharisees and teachers of the law.

But for reasons I don’t quite understand none of this really bothers me that much. I’m no Nelson Mandela and I certainly can’t claim to have mastered forgiveness but I don’t really hold any grudges against my old school. It wasn’t exactly Auschwitz and, besides, worse things have happened to me since (bereavement, redundancy, serious illness etc.) but no more than happen to most people I guess. The school is just another thing in the mix of my life and not a particularly big one at that.

But my brother, for example, is still very angry. Others also seem to be deeply scarred and are carrying burdens of rage and shame and grief and guilt all sorts of negative emotions. I’m sorry for them and for the legacy ACE has left in their lives. Perhaps it is amazing that after my experience of ACE I am now a Christian. Somehow – perhaps you would call it the grace of God – I have managed not to throw the baby out with the bathwater (and what water! Pretty disgustingly filthy.) But I wonder if I am in the minority. Certainly from those of my peers with whom I’ve kept in touch it seems to me that, among my cohort at least, the school was a pretty effective recruiting sergeant for skepticism if not outright atheism. Which is kinda ironic.

Postscript: I understand my old school in no longer uses ACE materials. This pleases me, but also vexes me. Why the latter? Because I was right all along — just too soon, too early. I told everyone how bad it was AT THE TIME, especially my parents, who made massive financial sacrifices to send me and my two brothers to that school. So I was ahead of my time, the curse of Cassandra, my mantra: “I TOLD YOU SO”. Talking all this through with parents over the Christmas vacation I was genuinely moved when they heard me out, then replied to me by presenting their case (well, that sounds too strong: I guess “put their side of the story” would be better) and then apologized unreservedly. As a parent myself I understand they wanted what was best for me and, as Philip Larkin’s famous poem says, they got it wrong, they made a mistake. Such is life. So it goes.

Oh, and that Principal? He’s now in charge of the Bridge Schools Inspectorate which inspects faith schools (and which, incidentally, gave his old school a glowing report.). Yup, the same man who hit me while presiding over a curriculum that inculcated racial segregation is now responsible for monitoring standards at other faith schools. You couldn’t make it up. And I haven’t. Thanks for reading.

Criticism of ACE from Christians