← Religious discrimination
In which I receive a prophecy from a televangelist →

Let me introduce you to a con man (probably)

This is Jesse Duplantis.

Among the people I knew, Jesse was everybody’s favourite preacher. There’s a simple reason for that: he was funny. That is Jesse Duplantis’ entire reputation: He’s the prosperity gospel preacher who makes you laugh. Now, I have no idea whether he was actually funny, or whether he just seemed funny by comparison with all the deathly sermons we normally heard. I can’t go back and judge now, because there’s too much baggage associated with it. I’ll let you judge for yourselves:

Actually, it’s not true to say that being funny is the whole of Jesse Duplantis’ reputation. He’s also The Guy Who Went to Heaven. (Please read on; today’s post is particularly awesome, if I say so myself…)

In his book and DVD, Heaven: Close Encounters of the God Kind, Jesse describes how God took him into heaven for a flying visit. 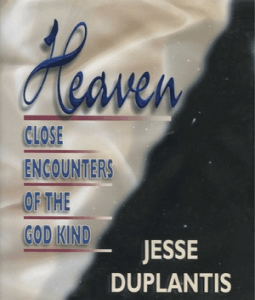 According to Duplantis, he has been having miraculous interactions with God for most of his life. It began when God appeared to him in his bedroom (page 25):

“The wind began blowing in our room. At first I thought it was the air-conditioning unit. But then it got stronger, so strong in fact that the curtains started flying up over the rods.

When this happened, I was lying on my stomach. I could feel the wind blowing through my body. It was going out my eyes, under my fingernails and out the pores of my skin. I just lost all strength and felt pinned to my bed.

What’s happening? I thought. Then I heard a Voice speaking audibly, saying, “You asked to see

Me; turn around!” This was an awesome experience! Still lying there, I said, “God!” Twice more, He said to me, “You asked to see Me; turn around.”

I didn’t know what to do. I felt as if my flesh was jumping off my bone. It was such intense physical pressure. My body couldn’t handle it. So I didn’t move.

The first thing I thought was, Cathy would look at Him. She’ll do it! She was still asleep, so I began to punch her with my elbow. I said, “Cathy, wake up! Don’t you know God’s in the room?” But she just wouldn’t wake up.

The prophecy I had received was coming to pass that night.

After the Lord had spoken those words to me for the third time, I said, “God, forgive me for being so stupid. Forgive me. I prayed wrong.”

I could have physically moved, yet I couldn’t. It seemed as if I was pinned to the bed. It was so awesome. I was out of breath. I could still feel the wind blowing. I thought, God is in this room! But I didn’t know what to do.”

Later, Duplantis describes how God miraculously transported him from Monroe to Lafayette (a three hour, 184-mile journey according to Google maps) in under 30 minutes – arriving just in time to see a dying girl miraculously healed (pages 38-41).

“On Highway 165, there is an overpass that goes from four lanes down to two. As I went up the overpass, it was as if that bubble began to burst in me. I just felt like praising God, so I lifted my hand and began to praise Him. I said, “Oh, Father, I just thank You. I love You, Jesus. You’re such a blessing!”

Then it began getting stronger and stronger. When that happens, usually I get louder and start hollering, “Glory to God!”

As I was praising God, the car seemed to fill up with smoke. I thought for a minute that my car was on fire. But it wasn’t like smoke I could smell. It was more like a fog. The anointing of God was flowing, so I just kept saying, “Glory to God! Thank You, Jesus!”

I don’t know what happened next, but all of a sudden I was in the Spirit. I didn’t feel or see anything. I was just in that fog, with smoke inside my car.

There I was in Lafayette! You can’t get from Monroe, Louisiana, to Lafayette, Louisiana, in only thirty minutes. It can hardly be done by jet, much less by car.

When it dawned on me that I had been translated, I thought, If I’ve been translated, then I didn’t burn any gas. When I turned on the ignition switch, I watched as the fuel gauge went all the way to full! I just cried out, “Oh, God!”

He said, “I had to get you to Lafayette in a hurry. That baby was dying.” Why I had to be in Lafayette to minister to that family over the phone when I could have ministered over the phone from anywhere, I don’t know. That’s just the way it happened.”

And all of this is just the warm up for when God takes him into heaven for a personal meeting (which lasted, according to Duplantis, for exactly five hours and fifteen minutes in August 1988).

Duplantis describes heaven in startling detail. Nothing dies in heaven (and nothing casts a shadow, because there is no darkness in heaven [p. 51]):

“I was amazed that the flowers were not crushed as we stepped on them, but I realized there is no death in heaven. Instead, each blossom popped back up and seemed to turn towards us as we passed so that we could always see their beauty.”

He meets Abraham, and then King David, who shows him to his personal mansion. That’s right! It turns out that when Jesus said, “In my father’s house are many mansions,” (John 14:2) he meant that he was personally building one for every individual who goes there.

Also, Jesse met the souls of aborted foetuses. It turns out that these go to heaven, where they grow up:

“All of a sudden, I heard kids singing and praising God. Then I saw them. They were carrying little harps.

I thought, Now what are these kids doing here? As I mentioned earlier, theologically I had been taught that there were no kids in heaven. So I asked the angel, “Where did all these children come from?”

“These are children that the earth did not want,” he said. “God brought them here.”

“But I thought people went to heaven because they chose to go.”

“No, Jesse, children must be taught the oracles of God.”

I saw that many people were teaching those kids, so I realized that God was using people as well as angels to teach others in heaven about Him.

Then I asked, “Are you talking about abortions?”

He said, “Yes. These children can’t wait to see their mothers.”

And, of course, he met Jesus. And he entered the throne room of heaven and saw God (and explained the Trinity):

“Everything in heaven is beautiful. The floor looked like marble with gold in it, gold threads or veins running through the marble. Although I couldn’t look up for very long at a time, I looked up from the floor in the direction of the overwhelming Light, and I saw Him! I saw Elohim, Jehovah God, Yahweh sitting on the Throne! But I saw His feet—only His feet. The Light was so bright that came from Him, I couldn’t see His face.

I was still lying on my face and getting weaker. In that mass of energy and power I could see God, Jehovah—His feet—sitting. There is a huge platform in front of the Throne like a stage. It seemed level to me, but actually it was raised. Everything in heaven is raised. The topography of the land goes up toward the Throne. Then out of that massive energy of Light and love and power I saw Jesus come in human form. There He was, like I had seen Him in Paradise. What seemed to be millions of people at the Throne of God fell down before Him.

Obviously, now I don’t believe any of this ever happened, but at the time I was thrilled to hear this word from God. I can barely tell you how awe-inspiring it was to hear about heaven from someone who had seen it firsthand. Of course, I knew heaven was my destiny, but it all seemed so much more real hearing about it from an eyewitness. God, I wanted to go there straight away. I couldn’t wait for the Rapture to happen. I could hardly contain myself. I’d always believed it, but now I had proof – someone had seen it and come back to tell us! It’s fair to say Jesse was a hero to me.

Not everyone felt this way. When Pastor Ray Bevan heard about it, he called Jesse Duplantis a liar. This was a shocking event. Bevan was the pastor of King’s Church in Newport, Wales. This mega-church had a congregation of over 1,000 at the time, making it by far the most successful prosperity church within driving distance of me. For Bevan to publicly denounce one of the prosperity gospel’s biggest stars was a big deal. I was greatly saddened to see one man of God attacking another, as I saw it. And I was sad that Bevan couldn’t see the obvious truth in what Duplantis was saying.

Now I’m inclined to agree with Ray Bevan (not a sentence I say often). But this raises a question I find myself wrestling with often: Which of the prosperity gospel preachers are deluded themselves, and which are the out-and-out con artists? It’s not simple to tell. I grew up around the UK directors for Kenneth Copeland Ministries and Jesse Duplantis Ministries, so I met big-time televangelists on several occasions. More importantly, people I knew (who were definitely sincere in their beliefs) hung around with them for extended periods. If they ever got an inkling that the Men of God might not be practising what they preached, they certainly kept it quiet.

Moreover, all the big televangelists were friends; they appeared at each other’s conferences and on each other’s TV shows. It seems like either they all must be genuine, or they must all be in on the scam together. And, between all the major televangelist ministries, there are hundreds of employees. If you search the web for criticism of, say, Kenneth Copeland from former employees, you will find plenty. But nothing I’ve seen claims he is insincere.

With hindsight, some of the preachers seem more likely to be frauds (Benny Hinn), while others I would bet my bank balance were genuine (Kenneth Hagin). But, if that’s true, that means some of the con artists were so good, they were also conning the genuine preachers. And that’s a pretty mind-blowing thought. I actually really want to believe they’re sincere. I’d rather think I was fooled by a belief system than by a shyster.

Anyway, you’ll understand from all this why I looked up to Jesse Duplantis so much. So, equally, you’ll appreciate that I was excited when I got the chance to play guitar in his meetings in 1998 and 1999. I’ll tell you about that on Monday.

Posted on October 19, 2012, in Christianity, Fundamentalism, Word of Faith. Bookmark the permalink. 8 Comments.

← Religious discrimination
In which I receive a prophecy from a televangelist →