← 22 awesome things I used to believe were sinful
God or Gorilla? →

I suppose I can chalk this up as a victory. The new edition ACE PACEs do not mention the Loch Ness monster. Or, for that matter, a sea monster allegedly caught by a Japanese fishing vessel.

If you’ve followed this blog at all, you’ll know that Accelerated Christian Education has taught that the probable existence of the Loch Ness monster is one in the eye for evolution by natural selection. Making this claim public has been my biggest success. It has been quoted in articles on Salon, AlterNet, the Washington Post, the New York Daily News, the Guardian, the Daily Telegraph… Hell, even The Sun got in on the act.

The Christian Post ran a story on it, and they even got a quote from spokespeople for Answers in Genesis and the Discovery Institute… and even those guys said it was a stupid argument to make. It was an unmitigated PR disaster for ACE.

Perhaps that’s why new edition biology PACEs have been brought out sooner than I was expecting. On the ACE website, they’ve been introducing the new PACEs in sequence, as you’d expect. According to the ACE website, they’ve got as far as the sixth grade (the biology course is 9th grade). But a blog from an ACE school in Gloucester features a scan from what is clearly a new edition of Biology 1099, the PACE which featured the Nessie claim:

Compare that with the old version, which was still current at least as recently as the start of this year, when my university library got its copy: 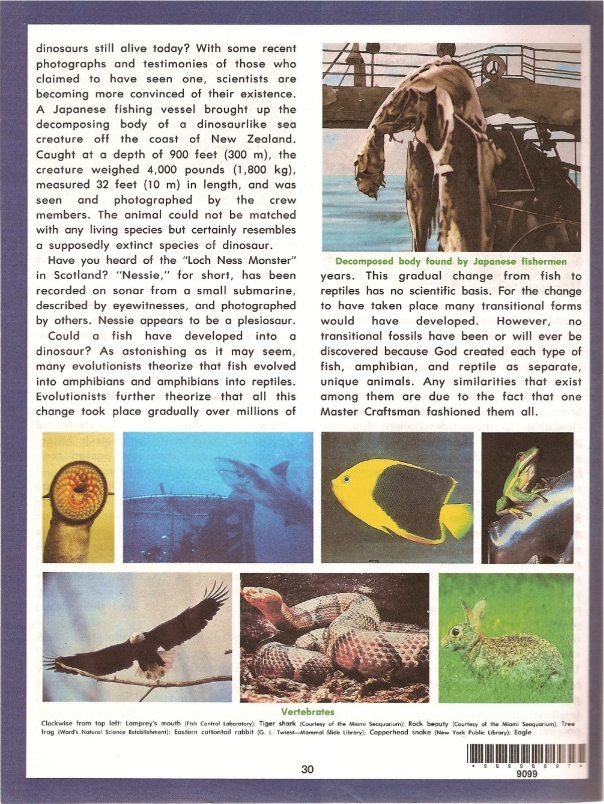 Over at the School of the Lion blog, they’re on bullish form, dedicating an entire blog post to how the new and improved PACE makes no mention of Nessie.

But read the new one. It’s not exactly an improvement, is it?

They’ve taken out the old bullshit about Nessie and Zuiyo Maro, and replaced it with fresh bullshit about cave paintings and folk tales about fucking dragons (I think I’ve seen that somewhere before).

Such pathetic arguments barely need a response, but some individuals more patient than me have bothered to debunk the cave art claims here and here. And even by Fox News.

I’m going to have to shout a bit.

School of the Lion’s pride (no pun intended) that their new curriculum doesn’t mention Nessie reminds me of the Chris Rock skit about parents who are proud for meeting their most basic obligations:

My school doesn’t teach the Loch Ness Monster is real.

You’re NOT SUPPOSED TO TEACH THAT NESSIE IS REAL!

So now I have to go and get new editions of the ACE biology PACEs, because I’m half way through writing a paper about the old ones, which have evidently been replaced.

I wonder what the Sensuous Curmudgeon will make of all this.

Edit: I must really thank Rachel Loxton at the Herald Scotland, and Bruce Wilson from Talk2Action. It was their stories that provided the basis for all the others, and which also made my blog go viral last summer.

← 22 awesome things I used to believe were sinful
God or Gorilla? →